An article by Christopher Smith

An informal virtual lunchtime discussion during the 2020 International Week gave us the chance to chew over trends in the world of memes during the ongoing global coronavirus pandemic. The origins, dissemination patterns and adaptations of memes are notoriously hard to track with sound academic rigour, so we rely for the time being on anecdotal evidence and professional insight.

Depending on where you look, memes are either helping us “escape our current hell”, track the public mood, or distract us with mirth. Whichever way you turn it, the ongoing pandemic will at least provide meme-watchers with plenty of material and enough time stuck at home in front of screens to try to make sense of it.

One day, we’ll look back and remember specific memes and viral trends that defined our collective pandemic experience. Due to the splintering of channels and platforms and the demise of group TV watching, we don’t have one trusted news anchor delivering the same news broadcast to the nation, we have a set of global communities who design and distribute their own mediated forms of address that spread not through the old top-down media system but rather, through a bottom-up meritocratic system with the technology and skills in place to allow practically anyone to be the creator of the defining joke of the moment.

The British Film Institute announced details on the 28th of April of a plan to collect and archive the most significant viral videos that have made the British public laugh, cry or feel shamed, in an effort to document for posterity something which is oftentimes all too quickly yesterday’s news.

That feeling of time being stretched and contracted beyond comprehension during days spent without the structure of the usual outside activities will be familiar to a lot of people. The reality is that here in Finland we have only been in lockdown since mid-March. But those few weeks have proven to be a very long time indeed in the world of online meme-trends.

When we look back at what compelled us to make and share memes, we’ll see that certain things were high in public priorities for an often limited period of time. Remember when everyone was stockpiling toilet paper or shaming those who did? Remember when people started to focus on the positive environment effects of the lockdown? Remember those videos of people clapping healthcare workers? Those meme-trends will give us the equivalent of the global newspaper headlines, but from the public perspective.

If there’s one thing that this period has taught keen watchers of media trends, is that things evolve quickly and unexpectedly. One major upheaval has been the emergence of TikTok as a major player in social media, as reported in The Guardian.

Already a popular app with teenagers, since the lockdown the 15-second-video sharing platform has seen an unprecedented level of downloads, now exceeding 2 billion globally. Being a TikTok Influencer is now a viable career option.

The Guardian article points to the anarchic and absurdist nature of the platform’s structure and content. It seems that, similar to the movie industry where “nobody knows anything,” so with online comedy micro-films, where it’s impossible to predict what will go viral. The platform itself and content therein may change now the demographic has become older and warped its own sense of purpose, but for now, it grows and grows, often with some resistance. 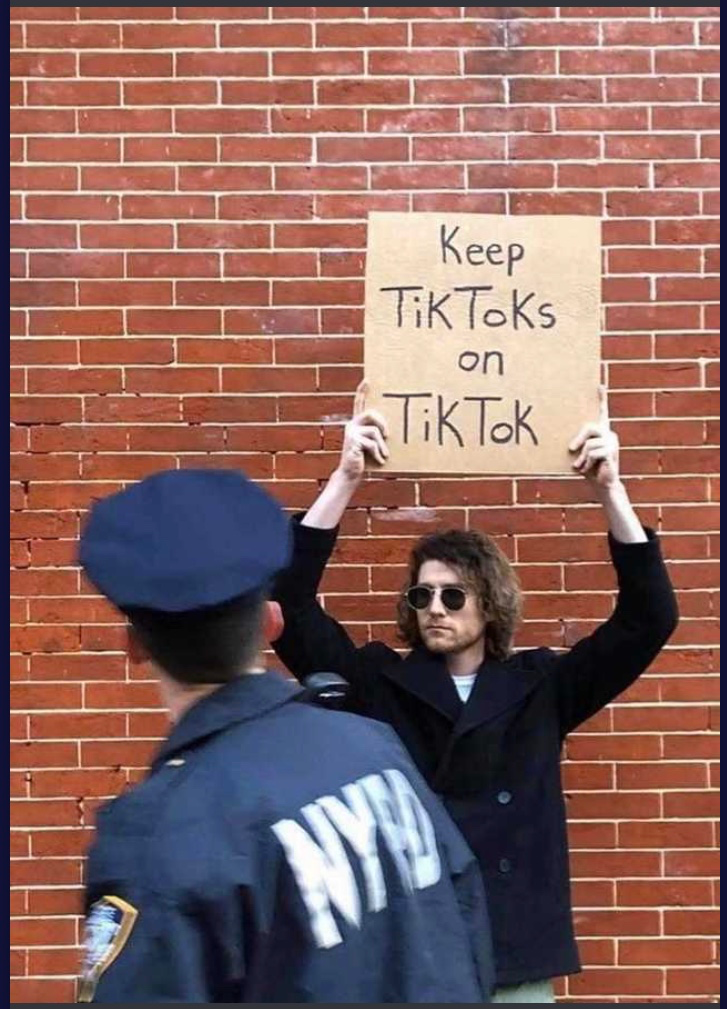 TikTok, whether you like it or not, continues to spread and infect other mediums.

The what and the why

From a humour-theory perspective, we have seen all kinds in evidence. In the Superiority corner, we have memes knocking people for not keeping to social distancing rules. 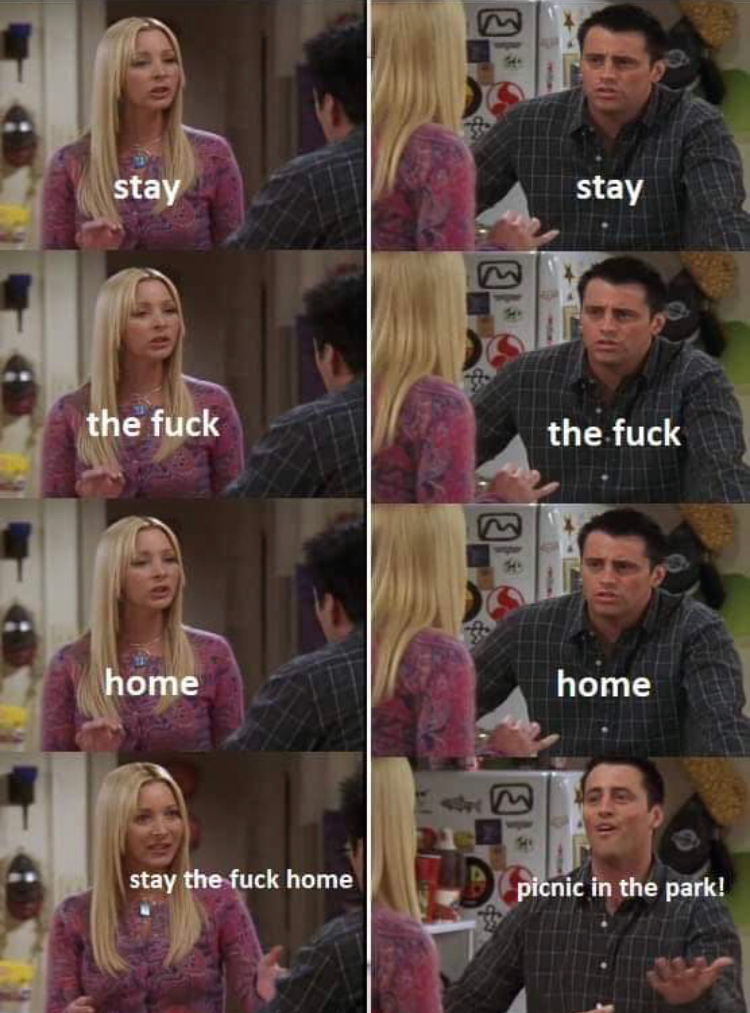 In the Relief corner, we have memes recognizing how difficult it is to maintain civilized relationships with close people in the lockdown. 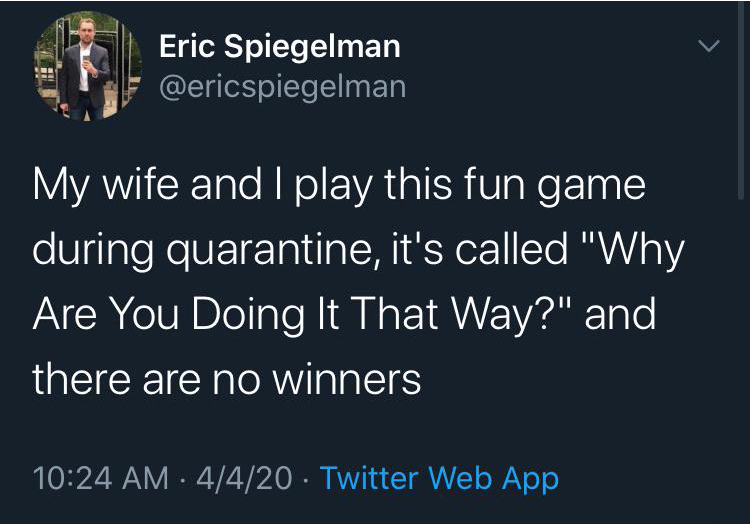 And in the Incongruity corner, memes attributing the whole sorry mess to our lizard overlords, who apologize for the experiment and will reset the simulation to 2015. 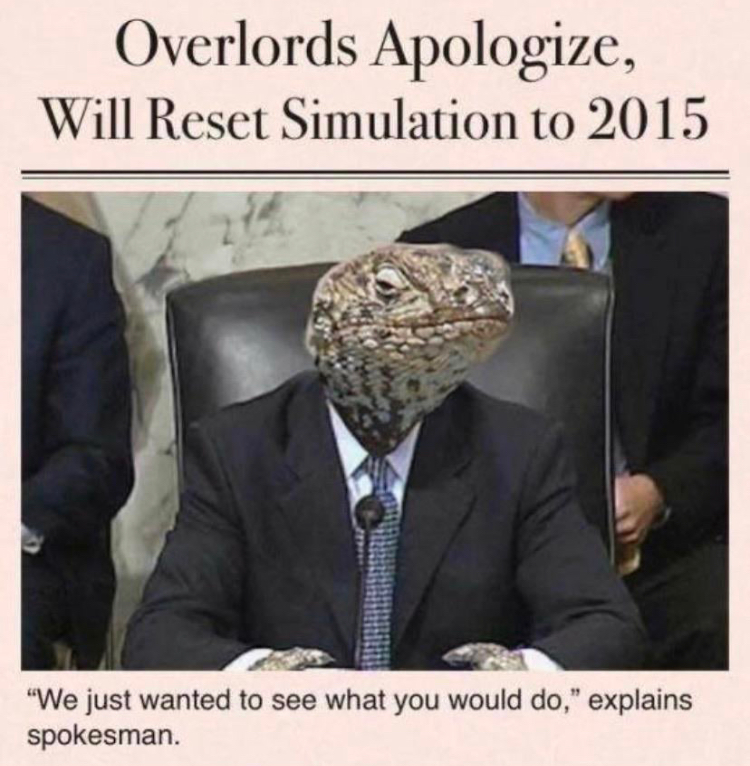 Topics have ranged from the very specific, such as toilet paper hoarding and hand-washing routines, towards the more general as time goes on.

Our iWeek discussion posited a few theories. One of the main reasons we feel compelled to express opinions or ideas through memes is as a coping mechanism. In an otherwise stressful time, memes help relieve stress. Laughter, as suggested by Freud among others, is a physical manifestation of the release of tension. As the saying goes, you have to laugh, otherwise you’d cry.

Another reason sending humorous memes during the lockdown is popular is distraction. British scriptwriter Jesse Armstrong, once said that comedy isn’t really good for anything, except making life worth living. This view strips joke making of any necessity to forge political currency, leaving us with pure laughs for laughs’ sake. And points at something fundamentally human.

My favourite explanation for why we send memes, especially during this lockdown, is the social function it serves. Memes furnish us with easily transmittable ideas that are enjoyable to consume and enticing to share. Wrestling with complicated ideas, memes allow an effective way to give, in the words of Transactional Analysts, a stroke to another person, without necessarily having to engage in a challenging discussion. They say “Hi. I’m here, thinking about this topic. And I’m thinking about you. Isn’t life funny?”. Significantly, they demand no more response than an emoji.